Four wounded in attack; Arab man taken to hospital with light injuries, after he was beaten by a crowd of locals, apparently after he was mistaken for a possible attacker. 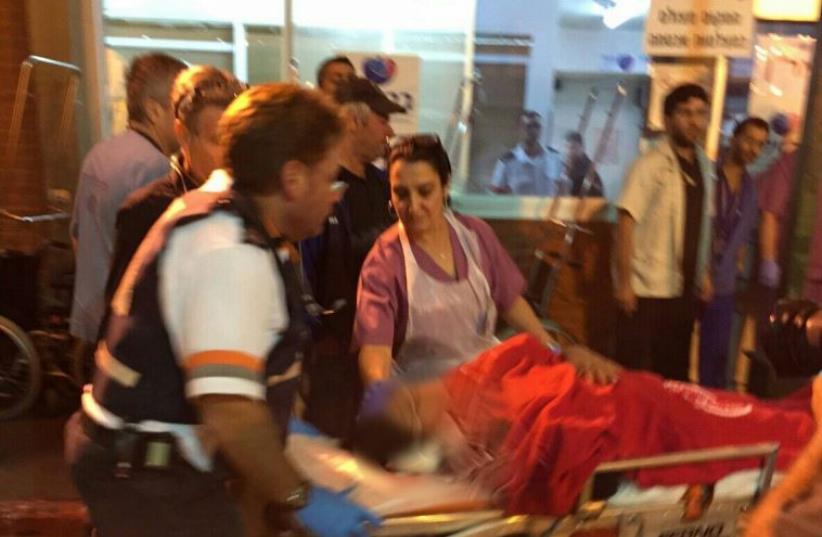 Magen David Adom at scene of Kiryat Gat stabbing, November 21, 2015
(photo credit: MAGEN DAVID ADOM)
Advertisement
Security forces caught the perpetrator of a stabbing terror attack in Kiryat Gat on Saturday night, after a evening-wide manhunt for the assailant. Four locals were wounded in the attack in the southern city Saturday evening before the assailant fled the scene.
Scene of Kiryat Gat stabbing
The youngest victim was described by Magen David Adom as a 13-year-old girl who was stabbed in the upper body. The paramedic service said that in addition to the teenage girl, two women aged 56 and 44 were moderately wounded, as was a 51-year-old man. Dr. Eli Ben-Valid, the head of the emergency room at Barzilai Medical Center in Ashkelon said all four suffered upper body stab wounds. Nearly two hours after the stabbing, Southern District police said they were still searching for the assailant, and had set up roadblocks in and around the city and dispatched a helicopter to search from above.Police said they detained around 10 illegal Palestinian laborers found at construction sites near the scene of the attack. Around 8 p.m. police announced that a man from the Beduin village of Segev Shalom had been taken to hospital with light injuries, after he was beaten by a crowd of locals, apparently after he was mistaken for a possible attacker.MK Miki Zohar, a resident of Kiryat Gat, said "we are in a wave of terrorism that will not end on its own. Citizens of Israel are livinglike ducks in a hunting range."Zohar called on Prime Minister Benjamin Netanyahu and Defense Minister Moshe Ya'alon to "go to war for the security of our citizens and crush the nests of murderers in order to bring quiet back to the residents of Israel."The attack in Kiryat Gat comes two days after a man from Dura in the West Bank stabbed two Israeli civilians to death while they were attending an afternoon prayer service at an office building in south Tel Aviv.The attack was not the only violent incident on Saturday. On Saturday evening a Palestinian man was shot and lightly wounded by IDF officers at the Oranit bus depot off Highway 5. The IDF Spokesman said soldiers called the man over for a security check and he “reacted violently," and they shot at him.Earlier in the day, a Palestinian woman carrying a knife was arrested by Border Police officers next to the Tomb of the Patriarchs in Hebron, and taken into custody on suspicion of planning to stab security personnel or civilians at the site.The Border Police said Saturday afternoon that officers patrolling next to the Tomb of the Patriarchs saw a woman who seemed suspicious and called her to stop, but she ignored their calls. The woman, a resident of the village of Yata outside Hebron, continued towards a police post, until officers cocked their rifles and overpowered her.The Border Police said inside the woman’s bag they found a knife and they suspect that she was planning to attack officers at the site.On Friday afternoon near Abu Dis, a Border Police officer was lightly hurt when a Palestinian motorist veered towards him and hit his leg, in what police suspect was an attempted ramming attack.The officer was treated at the scene and evacuated to hospital.The motorist escaped the scene and has not been found, the Border Police said.  Lahav Harkov contributed to this report.
Advertisement
Subscribe for our daily newsletter