"Bar-Ilan Speech was a gimmick; PM afraid to implement it," MK Hasson says. 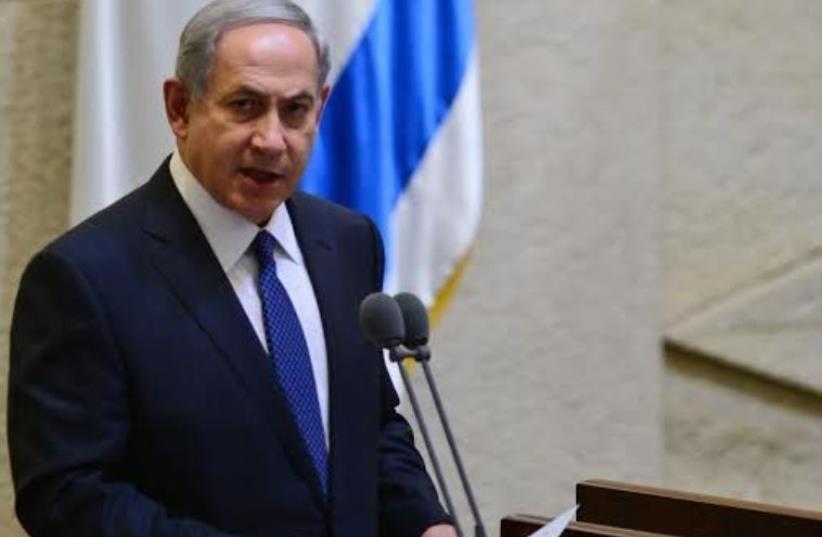 Prime Minister Benjamin Netanyahu at a special Knesset address, October 13, 2015
(photo credit: KOBI GIDON / GPO)
Advertisement
The Knesset voted down legislation requiring the government to implement Prime Minister Benjamin Netanyahu’s 2009 Bar-Ilan speech on Wednesday.The legislation by MK Yoel Hasson (Zionist Union) created an awkward situation for the coalition, as it calls to act on the ideas in Netanyahu’s speech, calling for a two-state solution with a demilitarized Palestinian state.
PM Netanyahu"s Bar-Ilan Speech (June 14, 2009)
During this year’s election campaign, Netanyahu said there would not be a Palestinian state based on pre-1967 lines under his watch. However, in his speech to the UN General Assembly last month, he repeated that there should be a demilitarized Palestinian state.Much of Netanyahu’s Likud Party opposes a two-state solution, as does Bayit Yehudi, and it is not part of the coalition’s guidelines.Hasson referred to these mixed messages when he presented the bill in the plenum, wondering whether Netanyahu would say he is in favor of two states when meeting with US Secretary of State John Kerry in Berlin.“Doesn’t Israel deserve a prime minister who’s consistent, who tells the public what he wants and where he’s going?” Hasson asked.“Today we’ll bring Netanyahu’s deception to an end,” he said. “He never brought his speech to the Knesset for a vote, because he was afraid to implement it. Some may say this bill is a gimmick, but [the Bar-Ilan speech] was really a gimmick.”According to Hasson, once the Knesset rejects the bill – which it did, 50:24 – Netanyahu will no longer be able to claim to support a two-state solution.“With God’s help,” MK Yinon Magal (Bayit Yehudi) enthusiastically responded.However, had the bill been approved, Hasson posited that the onus would have been on Palestinian Authority President Mahmoud Abbas to explain to the world why he can’t negotiate, Israel’s international standing would improve, and BDS would remain a marginalized extremist group.Tourism Minister Yariv Levin, who is the government liaison minister to the Knesset, told Hasson to “stop blaming Israel. The Palestinians are responsible for the fact there is no peace. Israel made mistakes that contributed to the instability, like the Oslo Accords and the Gaza disengagement.”Levin implored Hasson to “be a responsible opposition,” because “the Palestinians will use this vote against us.”Agriculture Minister Uri Ariel said after the vote that its result “is a clear statement by the government that the idea of two states for two nations is a private stance that does not represent the government of Israel... I expect the prime minister to present this stance to the world.”Zionist Union’s spokesman said, “The fact that Likud MKs and Netanyahu’s natural partners voted that they do not believe in the prime minister and Likud chairman’s words and his declaration, which he repeated a few weeks ago at the UN, that he supports a two-state solution, indicates that the prime minister lost his ability to control the country and the members of his government.”“Meretz joined them in not supporting a diplomatic agreement that will separate us from the Palestinians,” the Zionist Union spokesman added. “Today, it is clearer than ever that the extreme Right and extreme Left will lead us to a binational state.”Also Wednesday, the Knesset voted down a bill proposed by Yisrael Beytenu chairman Avigdor Liberman to cut campaign funding for parties that call to boycott Israel or products from any part of it, including the West Bank and Golan.Liberman said it would put an end to the “schizophrenic situation” in which MKs call to boycott taxpayers, who are paying those MKs’ salaries.“Speaking of schizophrenia,” Levin responded, arguing against the bill, “why are you trying to hurt the Arab list while sitting on the opposition benches with them?”
Advertisement
Hot Opinion