No war in 2015, but still a myriad of challenges for Israel

When it comes to Israel, nothing is ever simple – and its security obstacles are no exception. 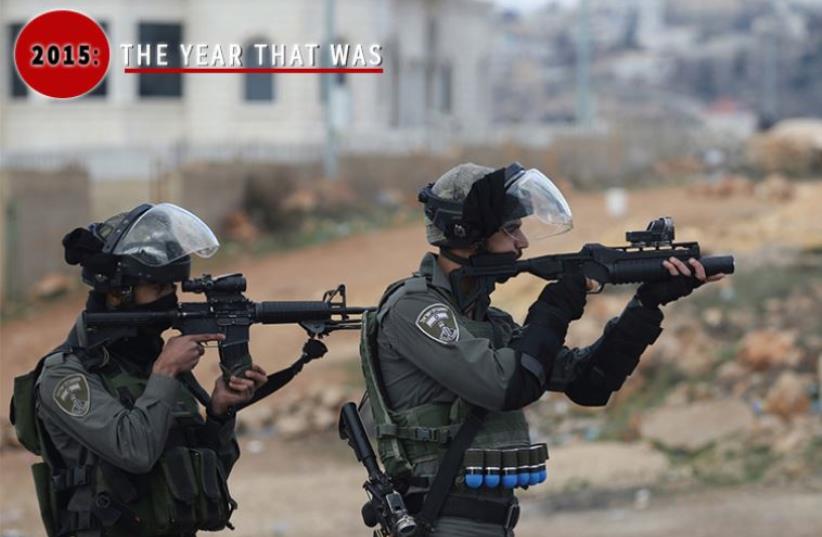 Border policemen point their weapons at Palestinian protesters during clashes in the West Bank village of Silwad, near Ramallah
(photo credit: REUTERS,JPOST STAFF)
Advertisement
The most important security-related event in 2015 was the one that didn’t happen. There was no war.Between summer 2006 and summer 2014, Israel launched on average every two years a major battle in response to terrorism and guerrilla incidents: one with Hezbollah in Lebanon and three with Hamas in Gaza.Though in the Talmud it says that since the Temple was destroyed prophecy has been given to fools, and so it is risky to foresee what will happen in 2016, most security and intelligence researchers assume that if the current circumstances continue at the same pace, the chance of an external war is slim.However, having said that, the Middle East is so fragile and unpredictable that every minor incident on one of Israel’s borders could get out of hand and escalate into a major confrontation.Still, Israel’s greatest security challenges are more domestic. The first is from the Palestinians. In the last three months the Palestinians embarked on a new cycle of terrorism and violence. So far 24 Israelis, mainly civilians, and 120 Palestinians have died.Various definitions and names were given to this violent wave – third intifada, knife intifada and intifada by individuals. The Palestinian Authority sympathizes with the acts of terrorism and sometimes even encourages them, but its officials and security forces are not involved.What this phenomenon is called is less important.What really matters is that not only the Palestinian leaders but also the general public in the West Bank are frustrated by the lack of any diplomatic negotiations with Israel. The PA realizes that the Israeli government under Prime Minister Benjamin Netanyahu wants to impose “Pax Israeliana” on the West Bank and force them to accept Israeli conditions.They refuse to surrender, and Israel could face a new challenge in which violence and terrorism will expand and escalate.The second threat facing Israel, which isn’t purely security driven, is from within. This is the polarization, the lack of social coherence and the tendency of socioeconomic disintegration and atomization of the society. Such developments create a natural hotbed for insidious right-wing Jewish terrorist groups, which dream of changing the regime and creating a Jewish theocracy with a monarchy. Above all, they are characterized by their hatred of Palestinians and readiness to use brutal violence, as witnessed in July in the village of Duma in the West Bank when three members of the Dawabsha family were burned alive.In a delayed reaction the Shin Bet (Israel Security Agency) went into full gear to solve the crime and tackle the threat. Better late than never.The Iranian nuclear threat, which has served and fed Netanyahu’s domestic and international agenda for most of his seven years in office, has diminished.The nuclear deal – a partial but significant dismantling of Iran’s nuclear infrastructure in return for lifting international sanctions – signed by the world powers is giving Iran breathing room. It will help the Islamic Republic to better position itself in the region but will not solve its problems. Lifting the sanctions will unfreeze $100 billion in financial assets, but the drastic drop in the price of oil from more than $100 to $35 a barrel will continue to cripple Tehran’s economy.The Iranian involvement, together with its Hezbollah proxy, in the Syria quagmire is another important contributing factor improving Israeli strategic posture. Despite suffering major blows at the hands of unconfirmed Israeli attacks against its top commanders in Syria and weapons convoys also on Syrian soil, Hezbollah is still deterred from retaliating and, together with its Iranian masters, doesn’t wish to be dragged into another round of war with Israel in Lebanon.Israel also successfully managed to form very close and intimate security and intelligence relations with the regime of President Abdel Fattah el-Sisi of Egypt, based on two common factors: the joint interests in defeating the Islamic State branch that operates in the Sinai Peninsula and restraining Hamas in Gaza.Another common enemy – the fear of Iran – helps Israel to reach out to Sunni states in the region such as Saudi Arabia and UAE to exchange views and estimates about regional developments.Monitoring Iran with a focus on knowing if it violates the nuclear deal and on its support for regional terrorist groups will remain a high priority for the Israeli intelligence community and especially the Mossad, whose new chief, Yossi Cohen, enters office in early January 2016.Militarily, Israel is the strongest power in the Middle East, a region in which nation states disintegrate, central governments lose authority and new, more vicious tribal and religious forces are emerging – namely, terrorist groups like Islamic State. On two of Israel’s borders there are concentrations of determined terrorist groups – Islamic State in Sinai and Jabhat al-Nusra (al-Qaida branch) in Syria.For the time being, Israel is a low priority for them, as they battle against the local regimes in Egypt and Syria, but sooner or later they will turn their attention to Israel. A reminder of that possibility was given on the eve of the New Year.Islamic State leader Abu Bakr al-Baghdadi released a taped message in which he declared: “Israelis tend to think that we have forgotten Palestine,” adding: “We didn’t for a moment. Jews will not have quiet and Palestine will soon be their graveyard.”Although his words are most probably sheer propaganda, one shouldn’t take his threats lightly.The year 2016, then, appears to be an unpredictable enigma.