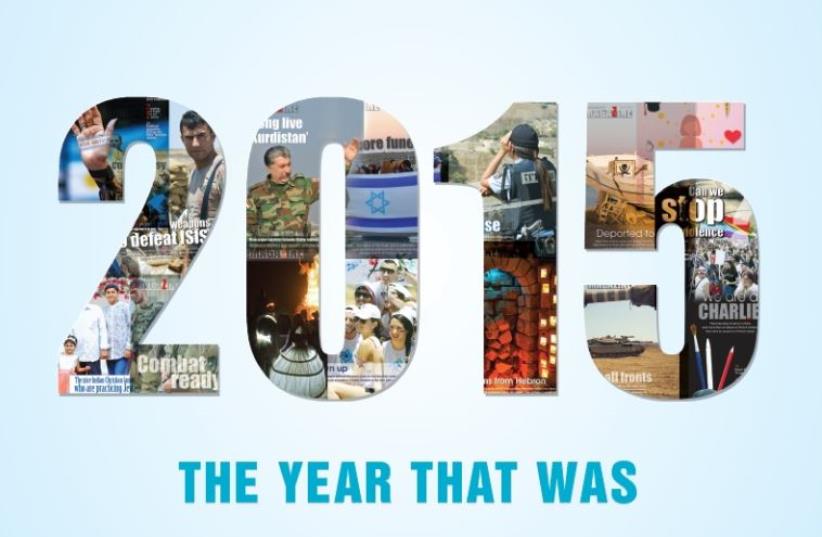 2015: The year that was
(photo credit: JPOST STAFF)
Advertisement
See all of the items from the Jpost's special year-end supplementThe Jerusalem Post’ stop 5 stories of 2015Netanyahu’s 2015: A whirlwind of wins and losses No war in 2015, but still a myriad of challenges for IsraelTime to move onIsrael, the US and Iran: An unstoppable train bound for a crashPicking next US President: A show in two actsThe Jewish vote at a turning point?Anti-Semitism in 2015: Old worries, new worries A world against ISISThe biggest tech trends of 2015 A behind-the-scenes glimpse of Jpost.comEditor's Note:Between acts of genocide perpetuated against the Yazidi people in Iraq, stabbings and shootings here in Israel and the murder of innocent civilians in Europe, terrorism was a truly global phenomenon in 2015.But even in the midst of such grisly events, there’s a silver lining of hope. For every act of terrorism there are the first responders on the scene, protest marches of solidarity with the victims and evidence of human resilience.We at The Jerusalem Post have a duty to document humanity at its best and worst.In 2015, our correspondents traveled the globe to report on the most pivotal stories of the year. When Prime Minister Benjamin Netanyahu flew to Washington in an effort to persuade Congress to vote against the Iranian nuclear deal – and engaged in a virtual standoff with US President Barack Obama – our diplomatic correspondent, Herb Keinon, was there to help us make sense of it all. And when that historic deal was signed last July, our DC bureau chief Michael Wilner was on hand to report the latest.Op-Ed editor Seth J. Frantzman traveled (twice!) to Kurdistan to report on the valiant efforts for an autonomous state, while the region around it plunged into a violent abyss.Sometimes the news comes right to our doorstep, when this year several stabbing attacks occurred within minutes of our Jerusalem offices. For this magazine, our national security reporter, Ben Hartman, interviewed outgoing deputy police commissioner Bentzi Sau to shed some light on the security implications of these indiscriminate and terrifying acts of violence that have plagued the entire country since Rosh Hashana.Naturally, it’s difficult to achieve a sense of harmony in a workplace when it is our job to cover chaos. We think, though, that this retrospective in which we reflect on the year’s biggest stories – and how they will shape 2016 – highlights that we’ve somehow all managed to band together to over the obstacles.Magazine editor, Laura Kelly, has penned an impressive piece explaining how we managed to do this from the Magazine’s perspective and our outgoing website manager, Nati Gabbay, has shed light on the difficulties inherent in covering the news in the fast-paced Internet dominant age we’re currently in. 2015 was tumultuous, nasty and unpredictable. Will 2016 bring better news? I certainly hope so.I can say with confidence, however, that while ev erything else is up for grabs, The Jerusalem Post team will continue to work tirelessly, with professionalism and grace, to provide the best coverage we can.